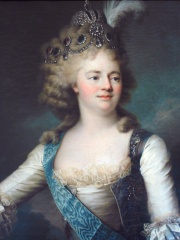 Maria Feodorovna (Russian: Мария Фёдоровна; née Duchess Sophie Dorothea of Württemberg; 25 October 1759 – 5 November 1828 [OS 24 October]) was Empress consort of Russia as the second wife of Tsar Paul I. She was the founder of the Office of the Institutions of Empress Maria. Daughter of Duke Frederick Eugene of Württemberg and Princess Friederike of Brandenburg-Schwedt, Sophie Dorothea belonged to a junior branch of the House of Württemberg and grew up in Montbéliard receiving an excellent education for her time. After Grand Duke Paul (the future Paul I of Russia) became a widower in 1776, Sophie Dorothea was chosen by Frederick II of Prussia, her maternal great-uncle, and Empress Catherine II of Russia, as the ideal candidate to be Paul's second wife. Read more on Wikipedia

Maria Feodorovna was the first wife of Emperor Alexander III of Russia and the mother of Nicholas II, the last tsar of Russia.

Among companions, Maria Feodorovna ranks 88 out of 687. Before her are Princess Alice, Duchess of Gloucester, Elisabeth Christine of Brunswick-Wolfenbüttel, Yakov Dzhugashvili, Margaret of Austria, Queen of Spain, Soraya Esfandiary-Bakhtiary, and Isabella of Austria. After her are Hortense de Beauharnais, Athaliah, Elisabeth Farnese, Josephine of Leuchtenberg, Maria Luisa of Parma, and Louise of Mecklenburg-Strelitz.

Among COMPANIONS In Poland

Among companions born in Poland, Maria Feodorovna ranks 2. Before her are Marie Leszczyńska (1703). After her are Catherine Opalińska (1680), Sophie of Pomerania (1498), Maria Clementina Sobieska (1702), and Sophia Jagiellon, Margravine of Brandenburg-Ansbach (1464).