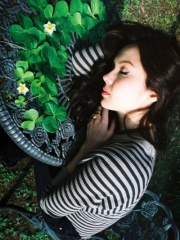 Marié Christina Digby ( MAR-ee-AY; born April 16, 1983) is an American singer, songwriter, guitarist and pianist known for her acoustic cover version of Rihanna's "Umbrella", which was posted on YouTube in 2007 (and has since been viewed over 22 million times). The song was subsequently played on the radio station STAR 98.7, was featured on the highly rated third season opening episode of the MTV show The Hills, and peaked at #10 on the Bubbling Under Hot 100 Singles chart. Digby performed the song on the late night talk show Last Call with Carson Daly on August 2, 2007. Read more on Wikipedia

Since 2007, the English Wikipedia page of Marié Digby has received more than 190,171 page views. Her biography is available in 15 different languages on Wikipedia making her the 2,232nd most popular musician.