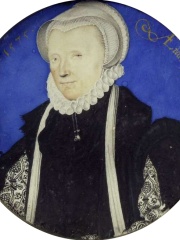 Margaret Douglas, Countess of Lennox (8 October 1515 – 7 March 1578), was the daughter of the Scottish queen dowager Margaret Tudor and her second husband Archibald Douglas, 6th Earl of Angus. In her youth she was high in the favour of her uncle, Henry VIII of England, but later incurred his anger for her unauthorised engagement to Lord Thomas Howard, who died in the Tower of London in 1537. Read more on Wikipedia

Among politicians, Margaret Douglas ranks 7,577 out of 15,577. Before her are Countess Claudine Rhédey von Kis-Rhéde, Piero Soderini, John Ernest IV, Duke of Saxe-Coburg-Saalfeld, Giorgio Perlasca, Ernst Albrecht, and Sicco Mansholt. After her are Boutros Ghali, William VI, Landgrave of Hesse-Kassel, Dietrich, Count of Oldenburg, Manuel I of Trebizond, Godepert, and Alexander Yakovlev.