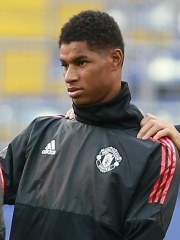 Marcus Rashford (born 31 October 1997) is an English professional footballer who plays as a forward for Premier League club Manchester United and the England national team. A Manchester United player from the age of seven, Rashford scored two goals on both his first-team debut against Midtjylland in the UEFA Europa League in February 2016 and his Premier League debut against Arsenal three days later. He also scored in his first Manchester derby match, his first EFL Cup match and his first UEFA Champions League match. Read more on Wikipedia

Since 2007, the English Wikipedia page of Marcus Rashford has received more than 8,041,578 page views. His biography is available in 54 different languages on Wikipedia making him the 2,972nd most popular soccer player.