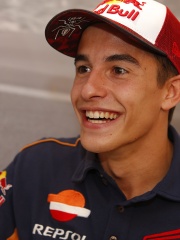 Marc Márquez Alentà (born 17 February 1993) is a Spanish professional Grand Prix motorcycle road racer, who has raced for Honda's factory team since his MotoGP debut in 2013. Born in Cervera, Catalonia, Spain, he is nicknamed the 'Ant of Cervera' worldwide (due to his height of 1.68m), and 'el tro de Cervera' in his hometown, meaning the 'Thunder of Cervera'. He is one of four riders to have won world championship titles in three different categories, after Mike Hailwood, Phil Read and Valentino Rossi, and is one of the most successful motorcycle racers of all time, with eight Grand Prix World Championships to his name, six of which are in the premier class. Read more on Wikipedia

Among RACING DRIVERS In Spain