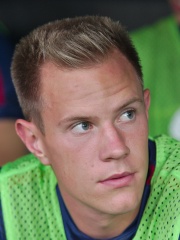 Marc-André ter Stegen (German pronunciation: [ˌmaʁk ʔanˈdʁeː teːɐ̯ ˈsteːɡn̩; - ʔãˈd-] listen ; born 30 April 1992) is a German professional footballer who plays as a goalkeeper for La Liga club Barcelona and the Germany national team. Regarded as a highly promising player in his youth, he has since established himself as one of the best goalkeepers in world football. Known for his reflexes, passing, and ball-playing ability, he has been often nicknamed as the Berlin Wall because of his reflexes and ball control abilities as a goalkeeper.After four seasons in the Bundesliga with Borussia Mönchengladbach, making 108 league appearances, he joined Barcelona for €12 million in 2014. Read more on Wikipedia