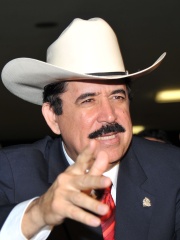 José Manuel Zelaya Rosales (born 20 September 1952) is a Honduran politician who was President of Honduras from 27 January 2006 until 28 June 2009. He is the eldest son of a wealthy businessman, and inherited his father's nickname "Mel". Before entering politics he was involved in his family's logging and timber businesses. Elected as a liberal, Zelaya shifted to the political left during his presidency, forging an alliance with the Bolivarian Alliance for the Americas known as ALBA. Read more on Wikipedia

Among politicians, Manuel Zelaya ranks 8,399 out of 15,710. Before him are Víctor Paz Estenssoro, Arnaldo Ochoa, Demetrius I of Georgia, Hannelore Kohl, Reuven Shiloah, and Miguel Miramón. After him are Tiridates II of Parthia, Theophano Martinakia, Pyotr Chaadayev, Urraca Fernández, Grigory Petrovsky, and Haim Bar-Lev.

Among POLITICIANS In Honduras