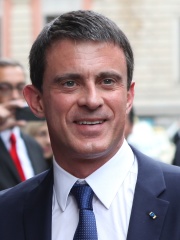 Manuel Carlos Valls Galfetti (French: [manɥɛl kaʁlos vals ɡalfɛti], Catalan: [mənuˈɛl kaɾˈɫos ˈβaʎs ˈɡalˈfeti], Spanish: [maˈnwel ˈbals]; born 13 August 1962) is a French-Spanish politician who has served as a Barcelona city councillor since June 2019. He served as Prime Minister of France from 2014 until 2016 under president François Hollande. Born in Barcelona to a Spanish father and a Swiss mother, Valls was Mayor of Évry from 2001 to 2012 and was first elected to the National Assembly of France for Essonne in 2002. Read more on Wikipedia

Since 2007, the English Wikipedia page of Manuel Valls has received more than 833,560 page views. His biography is available in 61 different languages on Wikipedia making him the 4,676th most popular politician.