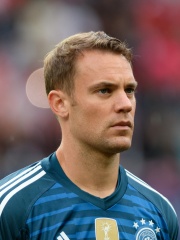 Manuel Peter Neuer (German pronunciation: [ˈmaːnu̯eːl ˈnɔʏ.ɐ, -ɛl -]; born 27 March 1986) is a German professional footballer who plays as a goalkeeper and captains both Bundesliga club Bayern Munich and the Germany national team. He is widely regarded as one of the greatest goalkeepers in the history of the sport, and by some as the greatest ever. Neuer has been described as a "sweeper-keeper" because of his unique playing style and speed when rushing off his line to anticipate opponents, going out of the goalkeeper box.Neuer started his career at Schalke 04 where he won the DFB-Pokal and DFL-Ligapokal. Read more on Wikipedia

Since 2007, the English Wikipedia page of Manuel Neuer has received more than 4,555,758 page views. His biography is available in 86 different languages on Wikipedia making him the 270th most popular soccer player.