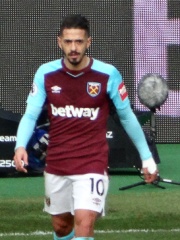 Manuel Lanzini (American Spanish: [maˈnwel lanˈsini]; born 15 February 1993) is an Argentine professional footballer who plays as an attacking midfielder for English club West Ham United and the Argentina national team. He has previously played for River Plate and Fluminense. He is described as possessing phenomenal dribbling ability, as well as fantastic acceleration and vision and the ability to ghost past defenders. Read more on Wikipedia

Since 2007, the English Wikipedia page of Manuel Lanzini has received more than 1,152,540 page views. His biography is available in 32 different languages on Wikipedia making him the 5,435th most popular soccer player.