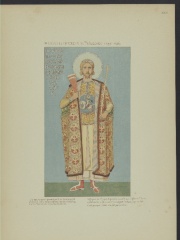 Manuel III Megas Komnenos (Greek: Μανουήλ Γ΄ Μέγας Κομνηνός, Manouēl III Megas Komnēnos; 16 December, 1364 – 5 March, 1417) was Emperor of Trebizond from 20 March, 1390 to his death in 1417. The major event of Manuel's reign was the arrival of the Central Asian conqueror Tamerlane to Anatolia. This led to the virtual destruction of the Ottoman Empire, which had threatened the existence of Manuel's domain, in the Battle of Ankara. Read more on Wikipedia

Page views of Manuel III of Trebizonds by language

Among politicians, Manuel III of Trebizond ranks 7,715 out of 15,710. Before him are Zu Ding, Rajaram I, Kamehameha III, Rangjung Rigpe Dorje, 16th Karmapa, Frederick, Hereditary Prince of Baden-Durlach, and Eustace IV, Count of Boulogne. After him are Erik Scavenius, Dhyan Chand, Fuad Chehab, Konstantin Pobedonostsev, Xu Shichang, and Souvanna Phouma.