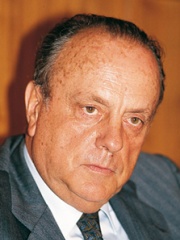 Manuel Fraga Iribarne (Spanish pronunciation: [maˈnwel ˈfɾaɣa iɾiˈβaɾne]; 23 November 1922 – 15 January 2012) was a Spanish professor and politician in Francoist Spain, who was also the founder of the People's Party. Fraga was Minister of Information and Tourism between 1962 and 1969, Ambassador to the United Kingdom between 1973 and 1975, Minister of the Interior in 1975, Second Deputy Prime Minister between 1975 and 1976, President of the People's Alliance/People's Party between 1979 and 1990 and President of the Regional Government of Galicia between 1990 and 2005. Read more on Wikipedia

Since 2007, the English Wikipedia page of Manuel Fraga has received more than 58,064 page views. His biography is available in 26 different languages on Wikipedia making him the 6,341st most popular politician.

Among politicians, Manuel Fraga ranks 6,303 out of 14,801. Before him are Blanche of Navarre, Countess of Champagne, Chilperic of Aquitaine, Bettino Ricasoli, Iolu Abil, Milan Milutinović, and Henry Campbell-Bannerman. After him are Stephen, Count Palatine of Simmern-Zweibrücken, Duchess Augusta of Brunswick-Wolfenbüttel, Malam Bacai Sanhá, Lý Thái Tổ, Thomas Pelham-Holles, 1st Duke of Newcastle, and Bezmiâlem Sultan.