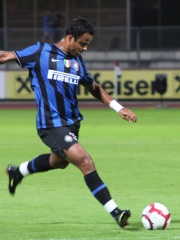 Alessandro Faiolhe Amantino (Portuguese pronunciation: [ɐlɨˈsɐ̃dɾu faˈjɔʎi ɐmɐ̃ˈtʃinu]; born 1 August 1980 in Ipatinga, Brazil), more commonly known as Mancini ([mɐ̃ˈsinʲi]), is a Brazilian former professional footballer, who played as a winger and most recently manager of Foggia. During his prime with Italian club A.S. Roma, Mancini was famed for his dribbling skills and use of feints, especially his step-overs. His favoured position was as right or left winger, although he was also capable of playing as a second striker or as an attacking midfielder. Read more on Wikipedia

Since 2007, the English Wikipedia page of Mancini has received more than 41,221 page views. His biography is available in 30 different languages on Wikipedia making him the 3,190th most popular soccer player.

Page views of Mancinis by language