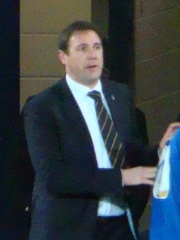 Malcolm George Mackay (born 19 February 1972) is a Scottish professional football manager and former player, who is currently the performance director of the Scottish Football Association. Mackay, who played as a defender, began his playing career in Scottish football, with Queen's Park and Celtic. He joined English side Norwich City in 1998, remaining there for six years. Read more on Wikipedia

Among coaches, Malky Mackay ranks 327 out of 329. Before him are Yang Pu, Gustavo Morínigo, Garry Monk, Nigel Adkins, Luís dos Reis, and Fred Hoiberg. After him are Luizinho Vieira, Alex Neil, and Daniel Vettori.