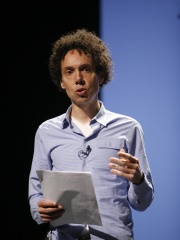 Malcolm Timothy Gladwell (born 3 September 1963) is an English-born Canadian journalist, author, and public speaker. He has been a staff writer for The New Yorker since 1996. He has published seven books: The Tipping Point: How Little Things Can Make a Big Difference (2000); Blink: The Power of Thinking Without Thinking (2005); Outliers: The Story of Success (2008); What the Dog Saw: And Other Adventures (2009), a collection of his journalism; David and Goliath: Underdogs, Misfits, and the Art of Battling Giants (2013); Talking To Strangers: What We Should Know about the People We Don't Know (2019) and The Bomber Mafia: A Dream, a Temptation, and the Longest Night of the Second World War (2021). Read more on Wikipedia