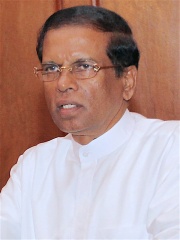 Pallewatte Gamaralalage Maithripala Yapa Sirisena (Sinhala: පල්ලෙවත්‍ත ගමරාළලාගේ මෛත්‍රීපාල යාපා සිරිසේන; Tamil: பல்லேவத்த கமராளலாகே மைத்திரிபால யாப்பா சிறிசேன; born 3 September 1951) is a Sri Lankan politician, who served as the seventh President of Sri Lanka from 9 January 2015 to 18 November 2019. Sirisena is Sri Lanka's first president from the North Central Province of the country and does not belong to the traditional Sri Lankan political elite.Sirisena joined mainstream politics in 1989 as a member of the Parliament of Sri Lanka and has held several ministries since 1994. He was the general-secretary of the Sri Lanka Freedom Party and was Minister of Health until November 2014 when he announced his candidacy for the 2015 presidential election as the opposition coalition's "common candidate". Read more on Wikipedia

Since 2007, the English Wikipedia page of Maithripala Sirisena has received more than 778,031 page views. His biography is available in 46 different languages on Wikipedia making him the 4,893rd most popular politician.

Among POLITICIANS, Maithripala Sirisena ranks 4,893 out of 14,801. Before him are Quintus Caecilius Metellus Numidicus, Ali of Hejaz, Jean-Marc Ayrault, Bianca Maria Visconti, Emperor Horikawa, and Ariston of Sparta. After him are Louis IX, Landgrave of Hesse-Darmstadt, Süleyman Çelebi, Philip I, Count of Boulogne, Sajida Talfah, Margaret of Austria, Queen of Bohemia, and Nuno Álvares Pereira.