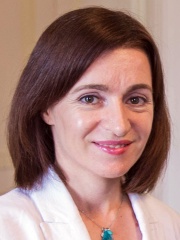 Maia Sandu (Romanian pronunciation: [ˈmaja ˈsandu]; born 24 May 1972) is a Moldovan-Romanian politician who has been the President of Moldova since 24 December 2020. She is the former leader of the Party of Action and Solidarity (PAS) and former Prime Minister of Moldova from 8 June 2019 until 14 November 2019. On 12 November 2019, Sandu's government collapsed after a vote of no-confidence, with 63 (deputies from PSRM and PDM) of the 101 MPs having voted on the motion submitted by the PSRM. Sandu was Minister of Education from 2012 to 2015 and member of the Parliament of Moldova from 2014 to 2015, and again in 2019.She was selected as the joint candidate of the pro-European PPDA and PAS parties for president of Moldova in the 2016 election. Read more on Wikipedia

Among POLITICIANS In Moldova