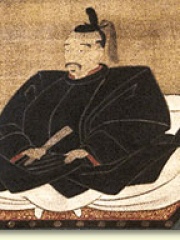 Maeda Toshiie (前田 利家, January 15, 1538 – April 27, 1599) was one of the leading generals of Oda Nobunaga following the Sengoku period of the 16th century extending to the Azuchi–Momoyama period. His preferred weapon was a yari and he was known as "Yari no Mataza" (槍の又左), Matazaemon (又左衛門) being his common name. He was a member of the so-called Echizen Sanninshu (Echizen Triumvir) along with Sassa Narimasa and Fuwa Mitsuharu. Read more on Wikipedia

Among politicians, Maeda Toshiie ranks 4,942 out of 15,577. Before him are Shabaka, Prince Alfonso, Count of Caserta, Duke Wen of Jin, Sophie Magdalene of Brandenburg-Kulmbach, Ian Smith, and Amun-her-khepeshef. After him are Henutmire, Abdul Razak Hussein, Emperor Xizong of Tang, Bezmiâlem Sultan, Prince Leopold, Duke of Brabant, and Princess Maria Clotilde of Savoy.