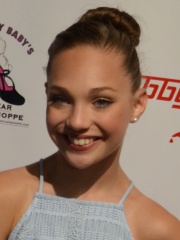 Madison Nicole Ziegler ( ZIG-lər; born September 30, 2002) is an American dancer, actress, author and model. She was initially known for appearing in Lifetime's reality show Dance Moms from 2011 (at age 8) until 2016. From 2014 to 2017, she gained wider recognition for starring in a series of music videos by Sia, including "Chandelier" and "Elastic Heart", which have in total attracted more than 5 billion views on YouTube. Read more on Wikipedia

Since 2007, the English Wikipedia page of Maddie Ziegler has received more than 11,692,425 page views. Her biography is available in 34 different languages on Wikipedia making her the 4,218th most popular actor.