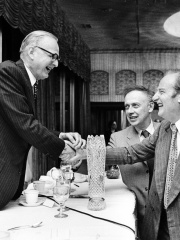 Maclyn McCarty (June 9, 1911 – January 2, 2005) was an American geneticist, a research scientist described in 2005 as "the last surviving member of a Manhattan scientific team that overturned medical dogma in the 1940's and became the first to demonstrate that genes were made of DNA." He had worked at Rockefeller University "for more than 60 years." 1994 marked 50 years since this work's release.McCarty devoted his life as a physician-scientist to studying infectious disease organisms, and was best known for his part in the monumental discovery that DNA, rather than protein, constituted the chemical nature of a gene. Uncovering the molecular secret of the gene in question — that for the capsular polysaccharide of pneumococcal bacteria — led the way to studying heredity not only through genetics but also through chemistry. The team responsible for this feat is known as the Avery–MacLeod–McCarty experiment. Read more on Wikipedia