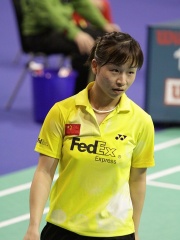 Ma Jin (simplified Chinese: 马晋; traditional Chinese: 馬晉; pinyin: Mǎ Jìn; born 7 May 1988) is a badminton player from China who specialises in women's and mixed doubles. She partnered Wang Xiaoli in women's doubles and excelled in the category until 2010 when both players are split after China failed to defend their Uber Cup against South Korea in Kuala Lumpur. Consequently, Ma Jin was unable to continue competing in the women's doubles event without her regular partner and she had to concentrate on mixed doubles instead. Read more on Wikipedia

Among badminton players, Ma Jin ranks 77 out of 81. Before her are Huang Sui, Mizuki Fujii, Reika Kakiiwa, Mathias Boe, Srikanth Kidambi, and Jung Kyung-eun. After her are Shin Seung-chan, Gail Emms, Ashwini Ponnappa, and Parupalli Kashyap.