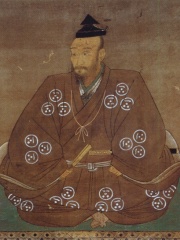 Mōri Motonari (毛利 元就, April 16, 1497 – July 6, 1571) was a prominent daimyō (feudal lord) in the western Chūgoku region of Japan during the Sengoku period of the 16th century. The Mōri clan claimed descent from Ōe no Hiromoto (大江広元), an adviser to Minamoto no Yoritomo. Motonari is known as a great strategist who began as a small local warlord (jizamurai) of Aki Province who extended his clan's power to nearly all of the Chūgoku region through war, marriage, adoption and assassination. Read more on Wikipedia

Mōri Motonari is most famous for the Battle of Sekigahara, which was the decisive battle in the power struggle between two major factions in Japan, the Toyotomi and the Tokugawa.

Among politicians, Mōri Motonari ranks 4,233 out of 15,710. Before him are Ivan Silayev, Gentius, George II Rákóczi, Johann Wilhelm, Elector Palatine, Itamar Franco, and Roger Mortimer, 1st Earl of March. After him are Muhammad I of Granada, Bronisław Komorowski, Quintus Aurelius Symmachus, Zhao Tuo, Fikret Abdić, and Æthelbald, King of Wessex.