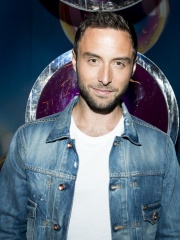 Måns Petter Albert Sahlén Zelmerlöw (pronounced [ˈmɔnːs ˈsɛ̂lmɛˌɭøːv]; born 13 June 1986) is a Swedish pop singer, songwriter and television presenter. He took part in Idol 2005, eventually finishing fifth, won the first season of Let's Dance, and scored a hit with his 2007 song "Cara Mia", which was his entry in that year's Melodifestivalen. Zelmerlöw was the host of Allsång på Skansen from 2011 to 2013. Read more on Wikipedia

Among singers, Måns Zelmerlöw ranks 1,145 out of 3,541. Before him are Bob Benny, Kati Kovács, Elissa, Imogen Heap, Ilanit, and Lee Hyori. After him are Maher Zain, Günther, Acker Bilk, Chris Farlowe, Beth Carvalho, and Kenan Doğulu.