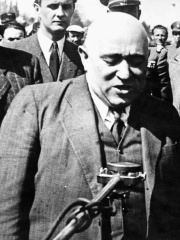 Mátyás Rákosi [ˈmaːcaːʃ ˈraːkoʃi] (9 March 1892 – 5 February 1971) was a Hungarian communist politician. He was born Mátyás Rosenfeld in Ada (present-day Serbia). Rákosi was the leader of Hungary's communist party from 1945 to 1956 — first as General Secretary of the Hungarian Communist Party (1945–48) and later holding the same post with the Hungarian Working People's Party (1948–56). Read more on Wikipedia

Since 2007, the English Wikipedia page of Mátyás Rákosi has received more than 320,937 page views. His biography is available in 45 different languages on Wikipedia making him the 1,625th most popular politician.

Among politicians, Mátyás Rákosi ranks 1,615 out of 14,801. Before him are Louis Joseph, Dauphin of France, Chilperic II, Ernest Augustus, Elector of Brunswick-Lüneburg, Mário Soares, Soong Mei-ling, and Tony Blair. After him are Maria Josepha of Austria, Henry II of Castile, Hoshea, John IV of Portugal, Cleopatra III of Egypt, and Adolf of Germany.