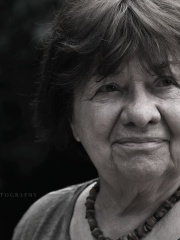 Márta Mészáros (born 19 September 1931) is a Hungarian screenwriter and film director. The daughter of László Mészáros, a sculptor, Mészáros began her career working in documentary film, having made 25 documentary shorts over the span of ten years. Her full-length directorial debut, Eltavozott nap/The Girl (1968), was the first Hungarian film to have been directed by a woman, and won the Special Prize of the Jury at the Valladolid International Film Festival.Mészáros' work often combines autobiographical details with documentary footage. Read more on Wikipedia

Since 2007, the English Wikipedia page of Márta Mészáros has received more than 41,097 page views. Her biography is available in 20 different languages on Wikipedia making her the 333rd most popular film director.

Among FILM DIRECTORS In Hungary