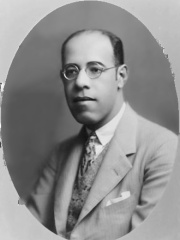 Mário Raul de Morais Andrade (October 9, 1893 – February 25, 1945) was a Brazilian poet, novelist, musicologist, art historian and critic, and photographer. One of the founders of Brazilian modernism, he virtually created modern Brazilian poetry with the publication of his Paulicéia Desvairada (Hallucinated City) in 1922. He has had an enormous influence on modern Brazilian literature, and as a scholar and essayist—he was a pioneer of the field of ethnomusicology—his influence has reached far beyond Brazil.Andrade was the central figure in the avant-garde movement of São Paulo for twenty years. Read more on Wikipedia

Since 2007, the English Wikipedia page of Mário de Andrade has received more than 113,024 page views. His biography is available in 26 different languages on Wikipedia making him the 1,522nd most popular writer.