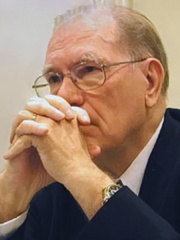 Lyndon Hermyle LaRouche Jr. (September 8, 1922 – February 12, 2019) was an American political activist, convicted fraudster, and accused cult leader who founded the LaRouche movement and its main organization the National Caucus of Labor Committees (NCLC).Born in Rochester, New Hampshire, LaRouche became sympathetic to socialist and Marxist movements and ideals in his twenties during World War II and by the 1960s became engaged in increasingly smaller and more radical splinter groups. During the 1970s he created the foundation of the LaRouche Movement and became more engaged in conspiratorial beliefs and violent and/or illegal activities. Read more on Wikipedia

Since 2007, the English Wikipedia page of Lyndon LaRouche has received more than 1,335,170 page views. His biography is available in 18 different languages on Wikipedia making him the 8,455th most popular politician.

Among politicians, Lyndon LaRouche ranks 8,410 out of 14,801. Before him are Kiến Phúc, Alcetas II of Epirus, Filipe Nyusi, Samsu-Ditana, Acamas, and Pierre Nkurunziza. After him are Marie Eleonore of Cleves, Miguel, Duke of Braganza, Shaohao, Liutpert, Yahya Jammeh, and Kenneth II of Scotland.