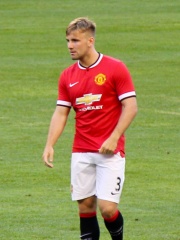 Luke Paul Hoare Shaw (born 12 July 1995) is an English professional footballer who plays as a left-back for Premier League club Manchester United and the England national team. Originally a member of Southampton's youth system, Shaw made his first-team debut for the club in January 2012, and signed his first professional contract in May that year before becoming a regular in the Southampton team over the next two seasons. Read more on Wikipedia

Since 2007, the English Wikipedia page of Luke Shaw has received more than 2,104,543 page views. His biography is available in 52 different languages on Wikipedia making him the 4,286th most popular soccer player.