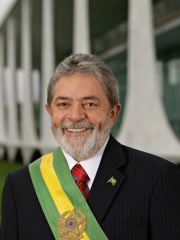 Luiz Inácio Lula da Silva (Brazilian Portuguese: [luˈiz iˈnasju ˈlulɐ dɐ ˈsiwvɐ] (listen); born 27 October 1945), known as Lula, is a Brazilian politician and former union leader who served as the 35th President of Brazil from 1 January 2003 to 31 December 2010. Lula was a founding member of the Workers' Party (PT) and ran unsuccessfully for president three times before achieving victory in the 2002 election. He was then re-elected in 2006.During his time in office, Lula introduced sweeping social programs including Bolsa Família and Fome Zero, aimed at combating poverty and lifting the station of the country's working class. Read more on Wikipedia