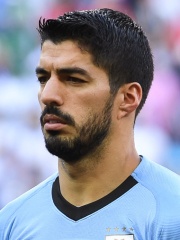 Luis Alberto Suárez Díaz (American Spanish: [ˈlwis ˈswaɾes]; born 24 January 1987) is a Uruguayan professional footballer who plays as a striker for Spanish club Atlético Madrid and the Uruguay national team. Regarded as one of the best players of his generation, and one of the greatest strikers of all time, Suárez has won nineteen major trophies in his career, including seven league titles and a UEFA Champions League at club level, as well as the 2011 Copa América with Uruguay. Suárez has won two European Golden Shoes, an Eredivisie Golden Boot, a Premier League Golden Boot, and the Pichichi Trophy. Read more on Wikipedia