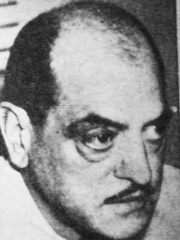 Luis Buñuel Portolés (Spanish: [ˈlwiz βuˈɲwel poɾtoˈles]; 22 February 1900 – 29 July 1983) was a Spanish, later naturalized Mexican, filmmaker who worked in France, Mexico, and Spain.When Buñuel died at age 83, his obituary in The New York Times called him "an iconoclast, moralist, and revolutionary who was a leader of avant-garde surrealism in his youth and a dominant international movie director half a century later". His first picture, Un Chien Andalou—made in the silent era—is still viewed regularly throughout the world and retains its power to shock the viewer, and his last film, That Obscure Object of Desire—made 48 years later—won him Best Director awards from the National Board of Review and the National Society of Film Critics. Writer Octavio Paz called Buñuel's work "the marriage of the film image to the poetic image, creating a new reality...scandalous and subversive".Often associated with the surrealist movement of the 1920s, Buñuel created films from the 1920s through the 1970s. Read more on Wikipedia

Among FILM DIRECTORS In Spain