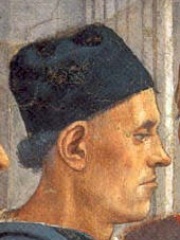 Luigi Pulci (Italian pronunciation: [luˈiːdʒi ˈpultʃi]; 15 August 1432 – 11 November 1484) was an Italian diplomat and poet best known for his Morgante, an epic and parodistic poem about a giant who is converted to Christianity by Orlando and follows the knight in many adventures. Pulci was born in Florence. His patrons were the Medicis, especially Lucrezia and Lorenzo Medici, who often sent Pulci on diplomatic missions. Read more on Wikipedia

Among people born in 1432, Luigi Pulci ranks 10. Before him are Anne of Austria, Landgravine of Thuringia, Isabel of Coimbra, Alvise Cadamosto, Ahmad ibn Mājid, Hōjō Sōun, and Bartolomeo Vivarini.  Among people deceased in 1484, Luigi Pulci ranks 6. Before him are Pope Sixtus IV, Saint Casimir, Edward of Middleham, Prince of Wales, Federico I Gonzaga, Marquess of Mantua, and Ippolita Maria Sforza. After him are Mino da Fiesole, Nicolas Froment, and Elisabeth of Bavaria, Electress of Saxony.