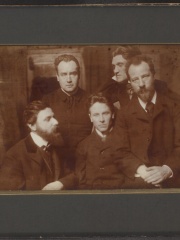 Friedrich Konrad Eduard Wilhelm Ludwig Klages (10 December 1872 – 29 July 1956) was a German philosopher, psychologist, graphologist, poet, writer, and lecturer, who was a two-time nominee for the Nobel Prize in Literature. In the Germanosphere, he is considered one of the most important thinkers of the 20th century. He began his career as a research chemist according to his family's wishes, though soon returned to his passions for poetry, philosophy and classical studies. He held a post at the University of Munich, where in 1905 he founded the Psychodiagnostisches Seminar; the latter was forced to close in 1914 with the outbreak of World War I. Read more on Wikipedia

Among philosophers, Ludwig Klages ranks 736 out of 1,081. Before him are Wonhyo, Leontion, Mario Bunge, Hossein Nasr, Anton Wilhelm Amo, and Helen Parkhurst. After him are Nikolai Amosov, Julien Benda, Eduard Zeller, George Ohsawa, Zhang Zai, and Henry of Ghent.