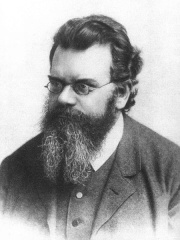 Ludwig Eduard Boltzmann (German pronunciation: [ˈluːtvɪç ˈbɔlt͡sman]; 20 February 1844 – 5 September 1906) was an Austrian physicist and philosopher. His greatest achievements were the development of statistical mechanics, and the statistical explanation of the second law of thermodynamics. In 1877 he provided the current definition of entropy, S = k B ln ⁡ Ω {\displaystyle S=k_{\rm {B}}\ln \Omega \!} , where Ω is the number of microstates whose energy equals the system's energy, interpreted as a measure of statistical disorder of a system. Read more on Wikipedia

Ludwig Boltzmann is most famous for his kinetic theory of gases, which states that the kinetic energy of a gas is proportional to the number of molecules in the gas.

Among people born in 1844, Ludwig Boltzmann ranks 11. Before him are Anatole France, Paul Verlaine, Nikolai Rimsky-Korsakov, Ilya Repin, Bernadette Soubirous, and Henri Rousseau. After him are Peter I of Serbia, Umberto I of Italy, Alexandra of Denmark, Friedrich Ratzel, Mary Cassatt, and Klas Pontus Arnoldson. Among people deceased in 1906, Ludwig Boltzmann ranks 4. Before him are Paul Cézanne, Pierre Curie, and Henrik Ibsen. After him are Christian IX of Denmark, Élie Ducommun, Archduke Otto of Austria, Alexander Stepanovich Popov, Susan B. Anthony, Karl Robert Eduard von Hartmann, Georgy Gapon, and Anton Arensky.

Among PHYSICISTS In Austria