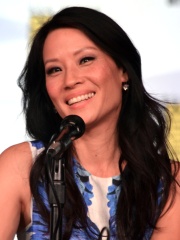 Lucy Alexis Liu (born December 2, 1968) is an American actress. Her accolades include winning a Critics' Choice Television Award, two Screen Actors Guild Awards and a Seoul International Drama Award, in addition to nominations for a Primetime Emmy Award. Liu has starred as Ling Woo in the television series Ally McBeal (1998–2002), Alex Munday in two Charlie's Angels films (2000 and 2003) and Joan Watson in the crime-drama series Elementary (2012–2019). Read more on Wikipedia

Lucy Liu is most famous for her roles in the television series Ally McBeal and the movies Charlie's Angels and Kill Bill.