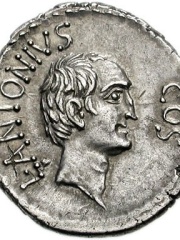 Lucius Antonius (1st century BC) was the younger brother and supporter of Mark Antony, a Roman politician. Read more on Wikipedia

Among politicians, Lucius Antonius ranks 4,190 out of 15,710. Before him are Eleanor of Alburquerque, Marquis of Haihun, Óscar Carmona, Abdul Halim of Kedah, Chindasuinth, and Prusias I of Bithynia. After him are Francesco II Gonzaga, Marquess of Mantua, Adad-nirari I, Emperor Shun of Han, Magnus IV of Norway, Emperor Ankō, and Ernst vom Rath.

Others Born in 81 BC

Others Deceased in 39 BC