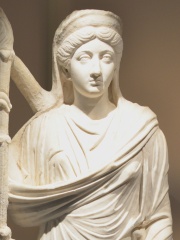 Annia Aurelia Galeria Lucilla or Lucilla (7 March 148 or 150 – 182) was the second daughter of Roman Emperor Marcus Aurelius and Roman Empress Faustina the Younger. She was the wife of her father's co-ruler and adoptive brother Lucius Verus and an elder sister to later Emperor Commodus. Read more on Wikipedia

Page views of Lucillas by language

Among politicians, Lucilla ranks 3,680 out of 15,577. Before her are Frederick of Naples, Corneliu Zelea Codreanu, Prince Charles, Count of Flanders, Rob Roy MacGregor, Sima Shi, and Arsaces I of Parthia. After her are Ahmose, Egils Levits, Princess Christina, Mrs. Magnuson, Avery Brundage, Sundiata Keita, and Emperor Wuzong of Tang.

Among people born in 150, Lucilla ranks 6. Before her are Nagarjuna, Clement of Alexandria, Shapur I, Pope Zephyrinus, and Clodius Albinus. After her are Dian Wei, Aristides of Athens, Vologases IV, Zhang Zhongjing, Gogukcheon of Goguryeo, and Aquilia Severa. Among people deceased in 182, Lucilla ranks 1.