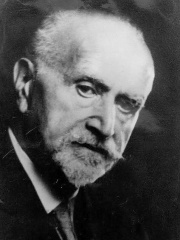 Lucien Lévy-Bruhl (10 April 1857 – 13 March 1939) was a French scholar trained in philosophy who furthered anthropology with his contributions to the budding fields of sociology and ethnology. His primary field of study involved primitive mentality. Born in Paris, Lévy-Bruhl wrote about the 'primitive mind' in his work How Natives Think (1910), where he posited, as the two basic mindsets of mankind, the "primitive" and the "modern." The primitive mind does not differentiate the supernatural from reality but uses "mystical participation" to manipulate the world. Read more on Wikipedia

Since 2007, the English Wikipedia page of Lucien Lévy-Bruhl has received more than 58,702 page views. His biography is available in 32 different languages on Wikipedia making him the 311th most popular philosopher.

Among philosophers, Lucien Lévy-Bruhl ranks 309 out of 1,005. Before him are Sri Aurobindo, Mazdak, Robert Nozick, Jacobus Arminius, Andronicus of Rhodes, and David Strauss. After him are Aśvaghoṣa, Roscellinus, Ramana Maharshi, Rudolf Bultmann, J. L. Austin, and Hwang Jini.