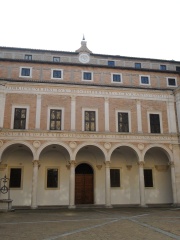 Luciano Laurana (Lutiano Dellaurana, Croatian: Lucijan Vranjanin) (c. 1420 – 1479) was an Italian architect and engineer from the historic Vrana settlement near the town of Zadar in Dalmatia, (today in Croatia, then part of the Republic of Venice) After education by his father Martin in Vrana settlement, he worked mostly in Italy during the late 15th century. He was principal designer of the Palazzo Ducale of Urbino and one of the main figures in 15th-century Italian architecture. Read more on Wikipedia

Since 2007, the English Wikipedia page of Luciano Laurana has received more than 27,233 page views. His biography is available in 16 different languages on Wikipedia. Luciano Laurana is the 218th most popular architect.

Among people born in 1420, Luciano Laurana ranks 12. Before him are Sesshū Tōyō, Barthélemy d'Eyck, Mahmud Pasha Angelović, João Vaz Corte-Real, Agostino Barbarigo, and Abdal-Latif Mirza. After him are Nicolas Jenson, Niccolò Antonio Colantonio, and Pedro Pardo de Cela. Among people deceased in 1479, Luciano Laurana ranks 5. Before him are Antonello da Messina, John II of Aragon, Eleanor of Navarre, and Jorge Manrique. After him are Antonio Rossellino and Louis IX, Duke of Bavaria.