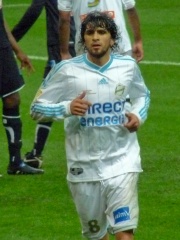 Luis Óscar "Lucho" González (Spanish pronunciation: [ˈlutʃo ɣonˈsales]; born 19 January 1981) is an Argentine professional footballer who plays for Club Athletico Paranaense from Brazil. A versatile midfielder who is able to play in different positions but mainly in the centre, he is well known for his fierce shot, passing skills and hardworking style, being affectionately known as El Comandante (the commander) due to his leadership skills.After starting with Huracán and River Plate, he signed for Porto in 2005, going on to have two separate spells at the club and appear in more than 200 official games, winning nine major titles. Read more on Wikipedia