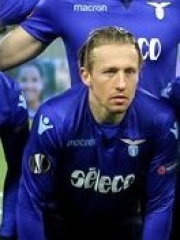 Lucas Pezzini Leiva (born 9 January 1987), known as Lucas or Lucas Leiva (Brazilian Portuguese: [ˈlukɐz ˈlejvɐ]), is a Brazilian professional footballer who plays as a defensive midfielder for Italian club Lazio and the Brazil national team. Lucas began his career as a box-to-box midfielder at Grêmio where he won the Campeonato Gaúcho in 2006 and 2007. In July 2007 he moved to Liverpool, where he played 347 professional matches over the course of a decade, winning the League Cup in 2012. Read more on Wikipedia

Since 2007, the English Wikipedia page of Lucas Leiva has received more than 1,398,054 page views. His biography is available in 45 different languages on Wikipedia making him the 2,715th most popular soccer player.