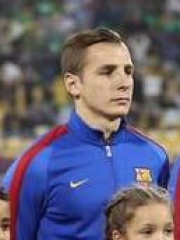 Lucas Digne (French pronunciation: ​[lykɑ diɲ]; born 20 July 1993) is a French professional footballer who plays as a left-back for Premier League club Aston Villa and the France national team. Digne began his career at Lille before joining Paris Saint-Germain in 2013. After spending a season on loan at Roma, he moved to Barcelona in July 2016. Read more on Wikipedia

Among people born in 1993, Lucas Digne ranks 56. Before him are Will Poulter, AnnaSophia Robb, Rosalía, Alycia Debnam-Carey, Emmelie de Forest, and Harry Maguire. After him are Michy Batshuayi, Seo Kang-joon, Sergio Rico, Ricardo Pereira, Antonio Rüdiger, and Johannes Thingnes Bø.