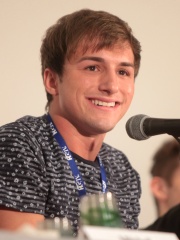 Lucas Alan Cruikshank (born August 29, 1993) is an American comedian, actor and YouTube personality who created the character Fred Figglehorn and the associated Fred series for his channel on the video-sharing website YouTube in late 2005. Read more on Wikipedia

Since 2007, the English Wikipedia page of Lucas Cruikshank has received more than 1,887,385 page views. His biography is available in 28 different languages on Wikipedia making him the 10th most popular youtuber.

Among youtubers, Lucas Cruikshank ranks 15 out of 13. Before him are Jenna Marbles, Michael Stevens, Zoella, Ryan Higa, KSI, and Phil Lester. After him are Jake Paul, Lilly Singh, Jacksepticeye, Tyler Oakley, Joe Sugg, and Joey Graceffa.