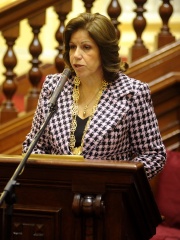 Lourdes Celmira Rosario Flores Nano (born October 7, 1959) is a Peruvian lawyer and politician who served as a councilwoman of Lima, Deputy from Lima from 1990 to 1992, Democratic Constituent Congresswoman from 1992 to 1995, Congresswoman from 1995 to 2000, and the Christian People's Party candidate for President of Peru in the 2001 and 2006 elections in which she ran under the National Unity. Born in Jesús María, Lima, Flores graduated from the Pontifical Catholic University of Peru in 1983, obtaining a law degree. After working as a legal advisor in the Ministry of Justice, Flores began her professional activity independently. Read more on Wikipedia