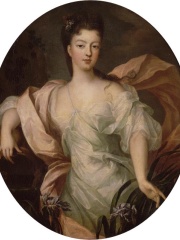 Louise Diane d'Orléans (27 June 1716 – 26 September 1736) was the seventh daughter and last child of Philippe d'Orléans, Duke of Orléans (Regent of the Kingdom from 1715 to 1723) and his wife, Françoise Marie de Bourbon, the youngest legitimised daughter of King Louis XIV of France and his mistress, Madame de Montespan. She was born during the Regency of Philippe d'Orléans, the Regent of Louis XV of France. The Princess of Conti by marriage, she died in childbirth at the age of twenty. Read more on Wikipedia

Among companions, Louise Diane d'Orléans ranks 383 out of 687. Before her are Elizabeth of Carinthia, Queen of Germany, Elizabeth the Cuman, Anne Hyde, John I, Duke of Bourbon, Dagmar of Bohemia, and Catharina of Württemberg. After her are Suzanne Mubarak, Matilda of Scotland, Isabella, Princess of Asturias, Amélie of Leuchtenberg, Eurydice II of Macedon, and Maria of Portugal, Queen of Castile.