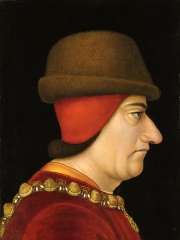 Louis XI (3 July 1423 – 30 August 1483), called "Louis the Prudent" (French: le Prudent), was King of France from 1461 to 1483. He succeeded his father, Charles VII. Louis entered into open rebellion against his father in a short-lived revolt known as the Praguerie in 1440. The king forgave his rebellious vassals, including Louis, to whom he entrusted the management of the Dauphiné, then a province in southeastern France. Read more on Wikipedia

Louis XI was King of France from 1461 to 1483. He was the son of Charles VII and Marie of Anjou. Louis XI is most famous for his administrative reforms.

Page views of Louis XI of Frances by language

Among politicians, Louis XI of France ranks 335 out of 15,577. Before him are Numa Pompilius, Edward V of England, Charles VIII of France, Seti I, Qianlong Emperor, and Leopold II of Belgium. After him are Henry IV, Holy Roman Emperor, Yitzhak Rabin, Alexander Dubček, Elagabalus, Philip III of Spain, and Victor Emmanuel III of Italy.

Among people born in 1423, Louis XI of France ranks 1. After him are Ferdinand I of Naples, Uzun Hasan, Georg von Peuerbach, Laonikos Chalkokondyles, and Pierre d'Aubusson. Among people deceased in 1483, Louis XI of France ranks 3. Before him are Edward IV of England and Edward V of England. After him are Richard of Shrewsbury, Duke of York, Charlotte of Savoy, Francis Phoebus of Navarre, Yolande, Duchess of Lorraine, Margaret of Bourbon, Henry Stafford, 2nd Duke of Buckingham, and Pedro Pardo de Cela.