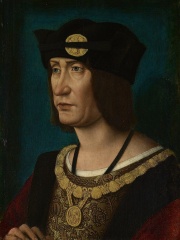 Louis XII (27 June 1462 – 1 January 1515) was King of France from 1498 to 1515 and King of Naples from 1501 to 1504. The son of Charles, Duke of Orléans, and Maria of Cleves, he succeeded his 2nd cousin once removed and brother in law at the time, Charles VIII, who died without direct heirs in 1498. Before his accession to the throne of France, he was known as Louis of Orléans and was compelled to be married to his disabled and supposedly sterile cousin Joan by his second cousin, King Louis XI. By doing so, Louis XI hoped to extinguish the Orléans cadet branch of the House of Valois.Louis of Orléans was one of the great feudal lords who opposed the French monarchy in the conflict known as the Mad War. Read more on Wikipedia

Louis XII was most famous for being the king of France who ruled from 1498 to 1515. He was a member of the House of Valois and succeeded his father Charles VIII.

Page views of Louis XII of Frances by language

Among politicians, Louis XII of France ranks 243 out of 15,710. Before him are Nicholas I of Russia, Konrad Adenauer, Mehmed I, Philip II of France, Charles the Bald, and Enver Hoxha. After him are Alexander III of Russia, Paul I of Russia, Godfrey of Bouillon, Mehmed VI, Charles VII of France, and Ferdinand II, Holy Roman Emperor.