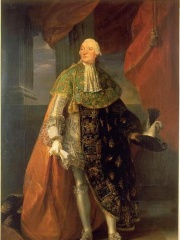 Louis Philippe Joseph d'Orléans (13 April 1747 – 6 November 1793), commonly known as Philippe, was a major French noble who supported the French Revolution. He was born at the Château de Saint-Cloud. He received the title of Duke of Montpensier at birth, then that of Duke of Chartres at the death of his grandfather, Louis d'Orléans, in 1752. Read more on Wikipedia

In 1830, Louis Philippe II, Duke of Orléans, became King of the French following the July Revolution. He was the first king of the House of Orléans, and his reign lasted until 1848 when he was overthrown during the February Revolution.

Among politicians, Louis Philippe II, Duke of Orléans ranks 1,261 out of 15,710. Before him are Giorgio Napolitano, Christine Lagarde, Boris Johnson, Elizabeth of Luxembourg, Manuel II of Portugal, and Den. After him are Sauli Niinistö, Casimir IV Jagiellon, Tongzhi Emperor, Ion Iliescu, Grand Duchess Anna Petrovna of Russia, and David II of Scotland.