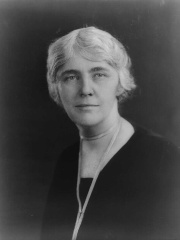 Lou Hoover (née Henry; March 29, 1874 – January 7, 1944) was the wife of President Herbert Hoover and served as the First Lady of the United States from 1929 to 1933. Marrying her geologist and mining engineer husband in 1899, she traveled widely with him, including to Shanghai, China, and became a cultivated scholar and linguist. She made extensive study of languages including Latin, Mandarin Chinese, Spanish, German, Italian and French. Read more on Wikipedia

Since 2007, the English Wikipedia page of Lou Henry Hoover has received more than 694,378 page views. Her biography is available in 36 different languages on Wikipedia making her the 9,239th most popular politician.

Among politicians, Lou Henry Hoover ranks 9,192 out of 14,801. Before her are Adam Gottlob Moltke, Ashurnasirpal I, Emma Bonino, Giselbert of Luxembourg, Alcetas, and Jacques Lauriston. After her are Otto Erich Deutsch, Cuilén, Patriarch Sergius of Moscow, Stanisław Mikołajczyk, Nicholas, Crown Prince of Montenegro, and Sushma Swaraj.