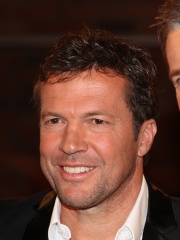 Lothar Herbert Matthäus (German pronunciation: [ˈloːtaʁ maˈtɛːʊs], audio ; born 21 March 1961) is a German football pundit and former player and manager. After captaining West Germany to victory in the 1990 FIFA World Cup where he lifted the World Cup trophy, he was awarded the Ballon d'Or. In 1991, he was named the first FIFA World Player of the Year, and remains the only German to have received the award. Read more on Wikipedia

Lothar Matthäus is most famous for being a German football player and manager. He played in the German Bundesliga for Bayern Munich, Borussia Mönchengladbach, and 1. FC Köln, and was captain of the West German national team that won the 1990 FIFA World Cup and the European Championship in 1980.